As bonsai, Ficus ginseng can symbolize abundance, balance, harmony, patience, simplicity, unity, and new beginnings. In feng shui, Ficus ginseng plants are associated with good luck and prosperity. Like other Ficus species, these plants are believed to radiate positive energy, especially in China.

Ficus ginseng trees (Ficus microcarpa) are one of approximately 850 species in the Ficus genus. The genus itself belongs to the fig or mulberry family (Moraceae). Ficus microcarpa is often confused for and sold as Ficus retusa, a similar Ficus species.

Ficus ginseng trees are native to parts of Southeastern Asia, including China and Taiwan. These trees are also indigenous to Australia and several islands in the West Pacific. Ficus ginseng trees thrive in humid tropical and subtropical climates such as rainforests, mangroves, and swamps.

Ficus ginseng trees get their common name from a Chinese word that translates as ‘roots’. This might refer to the aerial roots that Ficus ginseng trees can produce in humid areas. The scientific name, Ficus microcarpa, was first introduced in 1782 by the Swedish naturalist Carl Linnaeus the Younger.

The Meaning and Symbolism of Ficus Ginseng Plants

Eventually, the practice spread to Japan and evolved into bonsai. The new practice differed from penjing because bonsai focuses solely on growing and maintaining the tree, rather than a diorama. Ficus ginseng trees continued to be used for both bonsai and penjing.

Bonsai trees represent patience because of the dedication required to maintain them. Many bonsai also take several years to reach maturity. Bonsai is also a way of connecting ourselves to nature, hence the associations with balance, unity, and harmony.

You can tailor the meaning of your Ficus ginseng bonsai by pruning it according to different bonsai styles. Each style represents specific aspects of bonsai symbolism. Here are the symbolic meanings of each bonsai style:

Due to their link to both Chinese and Japanese botanical traditions, Ficus ginseng also has several meanings in feng shui. This Chinese practice focuses on adjusting the energy flow within your home to help boost certain aspects of your life. This involves using the Bagua map, which divides your home into areas directly related to things like family or relationships.

Another important theory in feng shui is the Five Elements Theory. This links each of the five elements – Earth, Fire, Metal, Water, and Wood – to particular qualities. Ficus ginseng plants are strongly linked to the Wood element, which represents compassion, creativity, growth, support, and renewal.

Ficus ginseng plants can make excellent gifts for friends or family members interested in bonsai. Due to their low-maintenance care requirements, Ficus ginseng plants are ideal for beginner bonsai enthusiasts. This can also communicate new beginnings or unity to the recipient.

Due to their link to the Wood element in feng shui, Ficus ginseng plants can communicate positive energy. This makes them a good gift for a friend or family member who is struggling with a difficult situation.

What do Ficus Ginseng Plants Symbolize?

Ficus ginseng plants are considered to be lucky because they’re linked to prosperity and success in feng shui.

How Long do Ficus Ginseng Plants Live For?

Ficus ginseng plants can live for decades with the correct care and growing environment.

For more, see our in-depth guide on where to position ficus ginseng plants for optimal care. 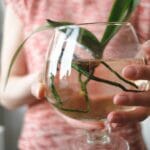 Can Orchids Grow in Water? 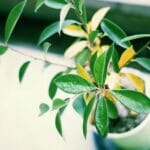