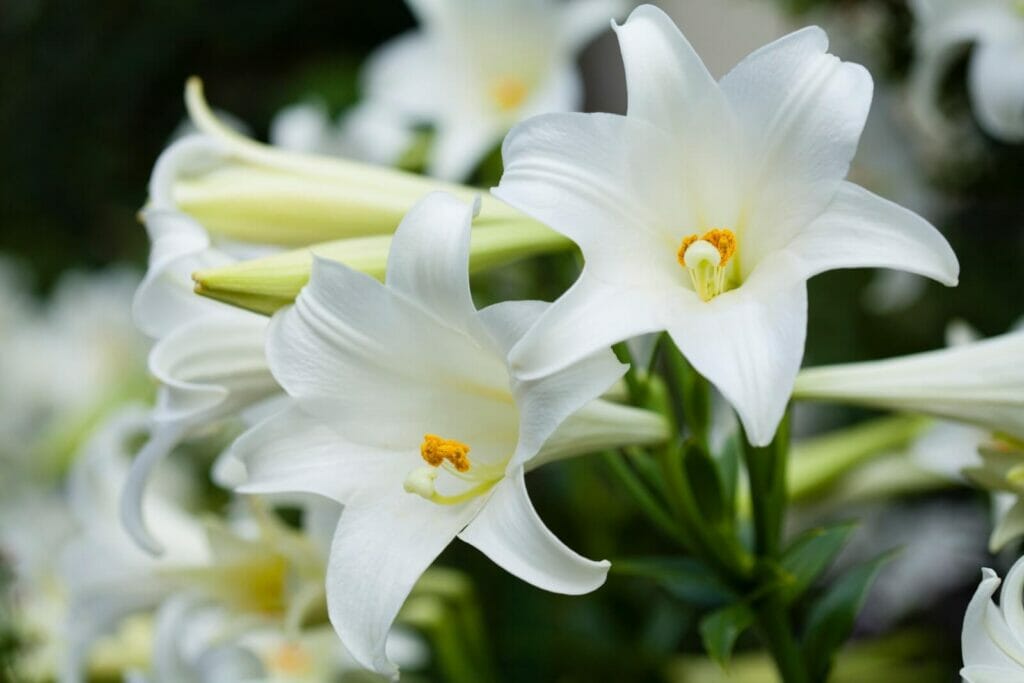 Easter Lily Meaning in the Language of Flowers

The Meaning, Symbolism, and Cultural Significance of Easter Lilies

Nicknamed the “white-robed apostle of hope,” this trumpet-shaped flower epitomizes purity and Christian love. They were discovered in the late 1700s and quickly rose to prominence in popular culture in England soon after that. However, it wasn’t until after World War I that the Easter Lily hit the shores of the US, where it’s been a hit ever since. This guide will take you through everything you need to know about Easter Lily flower meaning, symbolism, uses, benefits, and cultural significance around the world.

Lilium longiflorum, better known as the Easter Lily, is a flowering plant that can grow up to 3 feet tall. They farm part of the Lilium genus and Liliaceae plant family.

Most Easter Lily plants produce trumpet-like white flowers and will grow between 12 and 15 blooms, with each stalk producing two or more blossoms. Easter Lilies are quite fragrant, which is one of the reasons why they’re so popular.

As mentioned, the plant can grow up to 3 feet tall, but this height represents only plants that are grown in ideal conditions. In more northern climates, Easter Lilies don’t grow as tall. However, being grown in a cooler climate isn’t all downsides. The plant produces more leaves when it’s grown in cooler growing conditions, giving it a fuller, more lush appearance.

Despite being popular now in the Western world, Easter Lilies are actually native to Japan’s Liu-chiu (Ryukyu) Islands, and were cultivated for many years in China and Japan before being brought to the West by explorer and plant enthusiast Carl Peter Thunberg, in 1777, according to the University of Wisconsin-Madison.

By the late 1800s, Bermuda became a hotspot for Easter Lily growth. However, most exports of the flower came from Japan, until World War II, and the bombing of Pearl Harbor changed the trajectory of the flower’s history forever.

Nowadays, most of the world’s Easter Lilies find their start in Oregon and California before moving on to other locations around the world. In all, about 10 Easter Lily growers produce all those flowers each year that people enjoy on their Easter tables. This is down from a high of 1,200 growers in the US in 1945.

Cornell University reports that there are several Asiatic hybrids of the Easter Lily that are popular. Some of these include L. tigrinum, pumilum, dauricum, cernum, and nepalense to name a few.

The most predominant cultivar of the Easter Lily was created by grower James White. The Nellie White flower got its name inspiration from James White’s wife, Nellie.

Other popular varieties include the Deliana, which has flowers of a creamy yellow color. Lilies with bluish-pink flowers are called the Elegant Lady, though some people also call them the Pink Easter Lily. The White Elegance Lily is marked by many small white flowers, while the Triumphator produces white flowers with pink centers.

The flower gets its name from the season which makes it popular – Easter – and from the Old English lilie, which means “pale, lovely, white.”

What Regions Are Easter Lilies Native To?

This flower is native to Asia and is seen all over Japan, Mainland China, and Taiwan.

When are Easter Lilies in season?

Because of their name, many assume that the Easter Lily is an Easter season flower. However, according to the University of Wisconsin-Madison, the lilium longiflorum is cultivated out of season to accommodate the holiday.

Growers who grow the flower (so that it blooms in time for Easter) harvest the bulbs in the fall, sending them to the commercial greenhouses that will nurture the plants until the Easter season rolls around.

This is no small feat, according to the University of Nevada, Reno, because Easter falls on a different day each year. However, experienced growers know the signs to watch for and are able to encourage blossoms from the plants, even out of season.

Home growers aren’t likely to go the same lengths that commercial growers do, however, in order to get these blossoms out of season. For them, it’s best to go with the flower’s natural growing season, which is summer, where they make lovely, fragrant additions to summer flower gardens.

Uses And Benefits Of Easter Lilies

It probably comes as no surprise that a flower that is associated with Jesus, the Great Healer Himself, has many healing properties. The Chinese use the plant as an expectorant for colds, as well as using it as a mild sedative. It also has compounds in it that are known steroids that fight breast cancer and leukemia.

The Easter Lily’s lovely fragrance attracts pollinators of all sorts. However, as self-pollinating plants, they don’t need insects like bees and other pollinators to reproduce. They bear hermaphroditic flowers, which will basically pollinate themselves when the wind begins to blow.

Mentioned in both the Old and New Testaments, the Easter Lily carries deep and significant meaning in Christianity. Its white color is a symbolic representation of hope, rebirth, new beginnings, and purity. For Christians around the world, it is synonymous with the resurrection of Jesus Christ.

But the tradition of the flower isn’t just significant in Christian history. In the pagan cultures of Old, people associated the Easter Lily with fertility and motherhood. That’s why so many people give these flowers to their moms as gifts.

Although used predominantly as gifts for Easter and Mother’s Day flowers, this lovely flower makes a suitable gift for any occasion that needs a bit of a boost. For example, the Easter Lily’s message of hope lifts up those who are grieving, bringing the gifts of hope and joy in the midst of tears.

What do Easter Lily flowers symbolize?

Because they are associated with Jesus and the resurrection, as well as with mothers, they symbolize both Divine and maternal love.

Do Easter Lily flowers come back every year?

Easter Lilies that gardeners plant outside will come back the next year. However, since many of them are given as gifts in the form of potted plants, they must be replanted outside first.

When they’re grown in season (during the summer months), they last several months.

The Easter Lily has a long history. The lily flower is mentioned in both the Old and New Testaments, although it also makes an appearance in Greek, Roman, and pagan mythology. This popular flower originated in Japan and grew in Asia for centuries before being introduced to the West in the late 1700s.

At one time, more than 1,200 growers of Easter Lilies existed in the US, though today, there are only about ten growers. These ten growers grow most of the world’s supply of Easter Lilies, which they must cultivate out of season to ensure that they blossom in time for the Easter holiday each year.

These flowers bring joy, beauty, and hope to the Easter holiday and to any occasion that needs an infusion of love and joy. 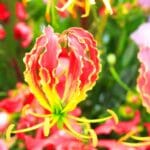 The 25 Rarest Flowers in the World

Candytuft Flower Meaning in the Language of Flowers