The Ideal Soil Mix for Cosmos Flowers to Thrive

Cosmos are some of the easiest and prettiest flowers to grow for a colorful summer display. These flowers are often grown as cut flowers for vases and bouquets and also work well in containers. Along with ample sunlight, cosmos need the correct type of soil to truly thrive. In this article, we’ll run through everything you need to know about the best soil for cosmos flowers and what you can do to amend and improve your existing soil base.

The Best Soil For Cosmos Flowers – The Essentials

Cosmos flowers require loose, well-draining soils that aren’t too fertile for optimal growth and maximum blooms. Chalky, loamy, or sandy soils are ideal for cosmos. These annuals also prefer neutral soils with a pH range between 6.5 and 7.5. Soil that is too fertile impairs flower production. Cosmos flowers can thrive in both dry and moist soil bases.

Cosmos is a genus of approximately 35 recognized species within the aster or daisy family (Asteraceae). The genus name originates from the Greek word “kosmos”, which translates as “beauty” or “harmony”.

Most types of cosmos flowers are clump-forming annuals that can grow up to 5 feet tall. Cosmos have delicate, feathery foliage and clusters of single, double, or semi-double flowers. Cosmos flowers consist of central disc florets surrounded by petals.

As well as being an October birth flower, cosmos flowers represent order, harmony, peace, love, and modesty. Cosmos are highly beneficial for the garden because they attract pollinators.

Most garden soils fall into one of six main soil types. Each soil condition suits different plants and has slightly different properties. Generally, loose, gritty soils drain well and have good airflow but lack nutrients. Dense soils hold lots of moisture and nutrients at the cost of poor airflow.

Chalky soils can be loose or dense, but nearly all are more alkaline than other soils. Chalky soils are made up of small rocks, meaning they can drain well but lack nutrients.

Clay soils are incredibly dense, so they can hold lots of water and nutrients. However, they have poor drainage and take a while to warm up during the spring. Clay soils are also hard to dig, making them tough to work with.

Loam is made from a mix of clay, sand, and silt – making it almost perfect for most plants. Loamy soils retain a good amount of water and nutrients but are also well-draining. Loamy soils are also easy to dig.

Peat is usually used in compost because iit contains organic matter. Although it holds moisture and nutrients well, it also lacks initial nutrients. Peat soils are also quite acidic, making them unsuitable for many plants.

Although sandy soils lack nutrients, they’re well-draining, easy to dig, and have pretty good airflow. Sandy soils also warm up quickly in the spring but can become compacted. Sandy soils feel gritty to the touch and crumble easily.

Silt soils feel very similar to sandy soils. They’re loose and well-draining but can retain more nutrients than sandy soils. Silt soils are easy to dig but can suffer from compaction.

The Best Type of Soil For Cosmos

Cosmos grow best in gritty, loose, well-draining soils that don’t contain too many nutrients. Cosmos are native to open meadows and scrublands in Mexico and parts of Central and South America. These habitats have nutrient-poor, well-draining soil conditions that are perfect for cosmos.

Chalky and sandy soils are ideal for cosmos because they provide plenty of drainage and lack nutrients. Cosmos can also grow in loamy or silty soils that have added drainage. Clay soils contain too many nutrients for cosmos and have poor drainage unless lots of sand or grit is added.

Cosmos don’t do well in overly fertile soil. The cosmos will focus primarily on producing foliage if the soil contains too many nutrients, especially nitrogen. This can result in little to no flower production.

If your soil is a little too acidic for cosmos, you can neutralize this by adding some lime. If the soil is far too alkaline for cosmos flowers, working in some sulfur will make the soil more neutral.

The Best Soil For Cosmos in Containers

The soil requirements for cosmos growing in containers aren’t much different from those growing in the ground. These annuals will still need loose, well-draining soil that isn’t very fertile. Sandy or chalky soils are still the best options, although loamy and silty soils can also work.

Cosmos growing in containers can benefit from small amounts of high-phosphorus fertilizer. Container plants use up water and nutrients faster than those growing in the ground. Sprinkling in some bone meal every month or so will help flower production for cosmos plants in containers.

You can use clay soil for cosmos growing in containers as long as you add in lots of grit or sand to improve drainage. Avoid adding compost or organic matter to your cosmos pots because this makes the soil too fertile.

Signs That Your Cosmos is in the Wrong Soil

Flowers Do Not Appear

The soil may contain too many nutrients if your cosmos doesn’t flower at the expected time. This encourages the cosmos to produce bushy foliage at the cost of flowers. To reduce soil fertility, mix in plenty of grit or horticultural sand before planting and avoid adding fertilizer.

If you’ve already planted your cosmos, add a small dose of high phosphorus fertilizer like bone meal to encourage flowering.

Cosmos grow well in dry or moist soils but suffer in waterlogged soils, which may lead to pest and disease problems. Drooping or yellowing leaves is a significant symptom of root rot. This is usually caused by overwatering and soil that has poor drainage and airflow.

Examine the roots for any brown, mushy, or smelly sections. Cut off rotted roots and add some extra grit or sand into the soil. Then replant your cosmos and avoid watering until the soil has dried out a bit.

Tips for Improving Your Existing Soil

If your existing soil isn’t ideally suited for cosmos flowers, there are ways to amend it. This can help you improve drainage, reduce soil fertility, or adjust pH levels.

If the soil contains too many nutrients, cosmos flowers will produce more foliage than flowers. To counter this, you need to reduce soil fertility. Mixing in some horticultural sand or grit helps the soil retain fewer nutrients.

Cosmos need neutral soils with a pH range of 6.5 to 7.5. Some soil types may be too acidic or alkaline for cosmos. Mix in some lime to reduce soil acidity. Work in some sulfur to make alkaline soils more neutral.

Cosmos grow best in moist or dry soils. However, wet or waterlogged soils cause problems such as root rot.

Can I improve soil health around my Cosmos?

Because cosmos don’t need lots of nutrients in the soil, soil health shouldn’t be a problem. Avoid using chemical fertilizers or pesticides that may damage your cosmos.

What should I add to the soil when planting Cosmos?

Add in some grit or horticultural sand when planting cosmos to improve soil drainage. If you’re growing cosmos in containers, add a small amount of high phosphorus fertilizer such as bone meal.

For the best possible blooms, grow cosmos in loose, gritty, well-draining soils that lack nutrients. If the soil is too nutritious, cosmos produce more leaves than flowers. Sandy, chalky, and loamy or silty soils are ideal for cosmos. The soil should have a neutral pH between 6.5 and 7.5. 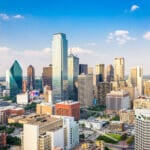 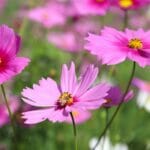 When and How to Fertilize Cosmos Flowers