Anemone flowers are loved for their delicate, dainty petals and beautiful array of colorful tones. They hail from the buttercup family of flowers and look great in garden beds, pots, and containers. What’s more, these delightful blooms have a great story to tell spanning Greek Mythology, Ancient Egypt, The Roman Empire, and across Eastern and Western cultures over the past few centuries. Here we’ll take you through everything you need to know about Anemone flower meaning and symbolism, their history and origin story, botanical characteristics, as well the numerous color varieties and species available today. 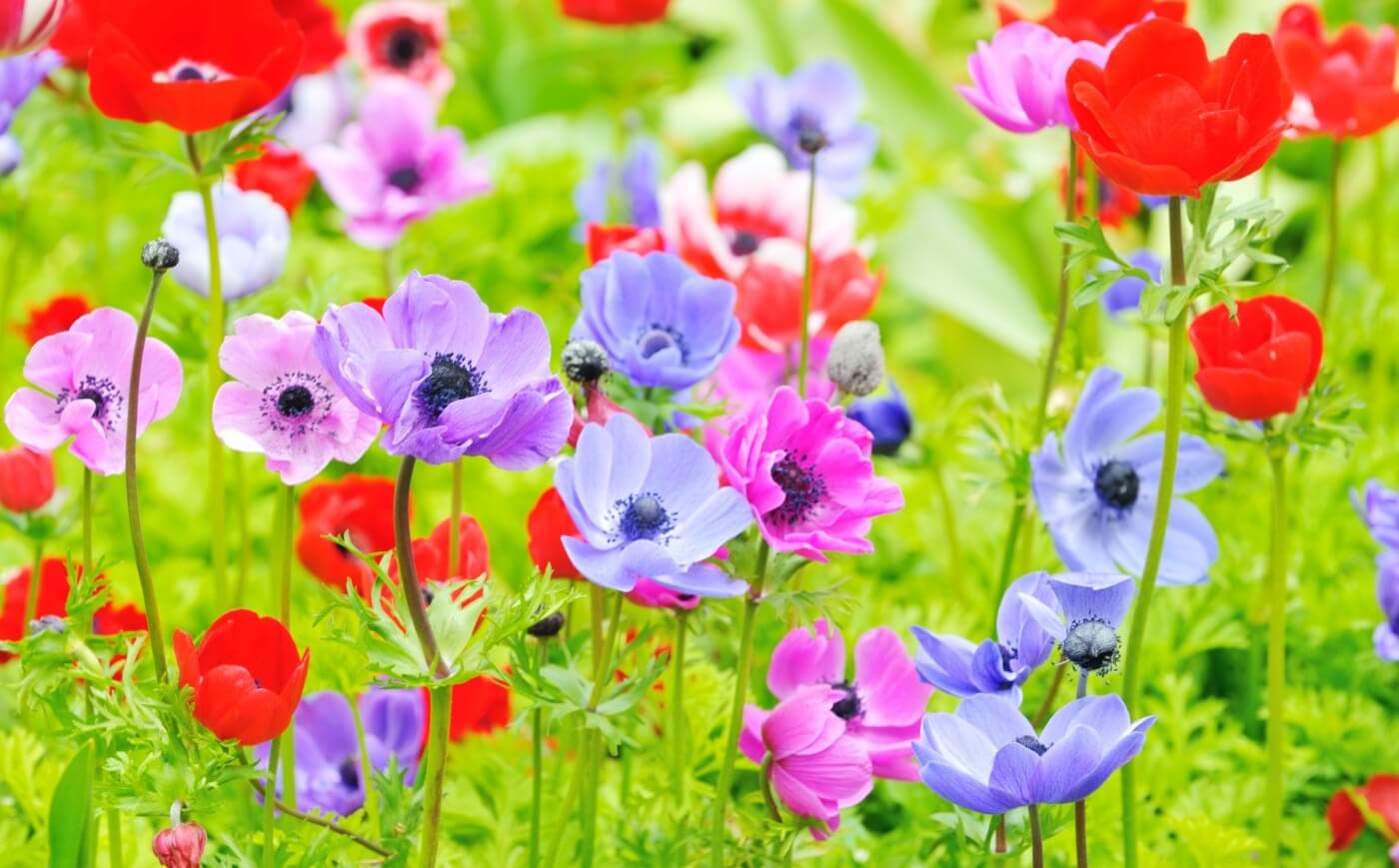 What Does the Anemone Flower Symbolize?

The first mention of the Anemone Flower in Western culture was in ancient Greece. Its name comes from the Greek anemos, meaning wind. Anemones arrive early in the year before spring has even warmed up the globe. Anemones seem to beckon spring in, and as a result, they have come to symbolize an anticipatory air.

Ancient Greek myths tell the story of the Anemone flower growing from the wounds of Aphrodite’s lover, Adonis, after he died. This story, combined with the flower’s early blossom, means that anemones have come to symbolize the passing of time.

In the East, however, anemones hold a very different symbolism. White anemones, which traditionally grew in ancient China and Egypt, were thought to be a symbol of bad luck. The reason why white anemone has an entangled association with bad luck in the East has gone through abstraction by the passage of time. We can still, fortunately, get a few hints from traditional symbology: in China and ancient Egypt, the color white represented death, which translates to bad luck.

About the Anemone Flower

The Anemone flower, as mentioned above, actually consists of over 60 species of flower. These include the striking blue and pink Anemone coronaria, the stark white Eriocapitella hupehensis (Japanese anemone), and Anemone hortensis (broad-leaved anemone).

There are several popular hybrids and cultivars of the anemone. One of these is the Anemone “Honorine Jerbert,” whose origin is China. These hybrids have adapted to the various environments they live in and range in height, growth rate, and hardiness.

Where Are They Native To?

When Are They in Season?

With its sheer number of varieties, judging which anemone is in season can be quite tricky.

In general, species of the genus Anemone will be in season in the spring. If the anemone is outside of this genus (take, for example, the Eriocapitella hupehensis), its blooming season will likely be the fall. For maximum blooming, water anemones frequently and fertilize in spring and early summer.

What Hardiness Zones Do They Grow In?

The breadth of species that are said to be anemones is vast, so the hardiness zone a particular Anemone can grow depends on its species.

In general, anemones are very hardy and can grow between plant hardiness zones 3A and 10B. We won’t go much into that here, but essentially that’s temperatures ranging from lows of -30 degrees Fahrenheit to highs as high as 115 degrees Fahrenheit! They need well-draining soil and some partial shade to thrive at their best.

Anemones have proved to contain high toxicity, particularly in large quantities. Human beings have used anemones for homeopathic medicine for years, so an adult that accidentally ingests some Anemone will be absolutely fine. Be very wary of your children or small animals having access to the anemone, however. Its highly toxic nature could spell death to an overeager little puppy!

According to research reported in the National Center for Biotechnology Information (NCBI), Anemone plants have a long history of medicinal use.

The Anemone plant has many valuable compounds that have the potential for use in modern medicine. Anemone has antioxidant, anti-inflammatory, and antimicrobial properties that have given it significant utility in homeopathic usage. Furthermore, Anemones exert anticancer bioactivities when ingested.

History & Origins of the Anemone Flower

The flower that bears the name anemone has sometimes gone by the nickname the “windflower” because the anemone is so light and fragile that wind can easily pluck the petals off.

The Anemone flower has held a distinctly symbolic role in cultures throughout the Western and Eastern worlds. In Greek Mythology, the Anemone flower came into being after Aphrodite, the Goddess of Love, cried on her slain lover’s body wounds, Adonis. Like the death of lovers, the anemone has come to represent man’s inexorable temporality.

Anemone flowers come in a multitude of beautiful colors. White, blue, red, and yellow Anemones dot the Earth, and each color holds a symbolic meaning that will vary from culture to culture.

Legend has it that when the Goddess Aphrodite wept atop the body of her Adonis, a red Anemone grew. The red anemone has since come to represent a loss in general and our unimpeachable mortality.

The red anemone has been well-known to represent forsaken love in many parts of Europe, such as Greece and Italy.

In China and Ancient Egypt, where white tended to represent death, the white anemone is an omen of bad luck. It is sometimes present in the form of funeral bouquets.

On the other hand, in many Western cultures, such as Germany and the United Kingdom, white flowers typically represent more positive sentiment and is considered to represent innocence (think, for example, of the tradition of the white wedding dress). In the United States, a white anemone often represents sincerity.

The blue anemone, gorgeous in a bouquet or as a standalone gift, represents mutual trust, an affirmation of intelligence, and love or respect. The blue anemone is also said to represent anticipation, for these early bloomers hearken the Halcyon days of late Spring and early Summer.

Like its cousin on the far end of the color spectrum, purple or indigo anemone represent anticipation. They often come as bouquets meant to commemorate happy events with happy returns: weddings, baby showers, and the like.

Yellow anemones have an exclusively happy meaning in China. In this country, gold represents the coming fortune, and as such, the yellow anemone represents a commercial success.

The History of Anemone Flowers in Greek Mythology

The Greeks first gave a name to the beautiful flower that is anemone, and the mythology surrounding this flower is quite impressive.

Long ago, in Greece, it is said that Aphrodite, the Goddess of Love, that tremendous imperturbable force that has governed the lives of men and women from time immemorial, fell for Cupid’s arrow herself.

Aphrodite fell for the handsome youth Adonis (whose name we may recognize as a colloquialism denoting the pinnacle of male beauty). The other Gods, who had been pining for Aphrodite for years and receiving nothing but cold looks from her, got jealous.

Full of spite, the Gods sent a boar to attack Adonis as he frolicked through the wood. The boar, malevolent and strong, gored the youth, who fell to the ground, rapidly expiring. Aphrodite, incensed at her fellow Gods and mournful for her lost lover, wept with rage at the body of this ill-fated youth. As she cried, a flower grew from his wounds.

Like Adonis, anemones are here to be loved and looked at but briefly. When the wind “shakes the darling buds of May,” the anemone has already left us, only to return in the next year.

The Meaning of Anemone Flowers in Ancient Egypt

The Meaning of Anemone Flowers in Chinese Culture

Traditionally, white anemones grew in imperial China. In ancient Chinese symbology, “white” represented the spectral forces of death and the underworld. As such, the small white anemones had been infamous to be the foreboding of ill-luck to those that laid eyes on them.

Luckily for admirers of these shapely flowers, however, anemone comes in more than just white. In Chinese culture, red and gold are the colors of the new year. Red represents good fortune and life in general, while yellow represents material wealth and commercial success. Because the colors of red and gold have such cultural value in China, the anemones that bear these colors are also quite remarkable.

The Meaning of Anemone Flowers in Christianity

Similar to the story of Adonis, Christianity has its own mythology surrounding the Anemone flower. In the Christian tradition, the deep red of the anemone represents the blood that Jesus shed on the cross.

The Meaning of Anemone Flowers in Victorian Times

According to floriography, the language of flowers developed in 19th century Victorian England, Anemones represented frailty and fragility.

It seems that we human beings are fascinated with the Anemone flower. The Greeks included the origin story of this flower in their mythology, and medieval peasants were said to carry anemones around with them as a boon to ward off pests and diseases.

Anemones have also found their way into high art: Henri Matisse was quite fond of anemones, and he included paintings of them in many of his portraits.

Why do we find anemones so fascinating? Perhaps the fact of their early blooming makes them highly conspicuous beacons of hope, raising their heads from the snow-covered ground to tell us of the coming spring. Perhaps their beauty, all too brief, reminds us of our own lives.

Anemone flowers are gorgeous, and including one in an arrangement or bouquet for a special occasion can be an excellent idea. However, you may be wondering—what’s the right event to give an Anemone for?

The answer is, like the anemone, not so simple. Depending on where you are in the world, you may not want to give an Anemone for any kind of event. In Asia, for example, though thoughts are expanding in terms of anemone, it still might be safest to stick to other flower varieties such the peony or chrysanthemum.

In western floral design, you’ll find seasonal bouquets and vase arrangements featuring an array of stylish designs that showcase these beautiful flowers which make great gifts for birthdays, thank you messages and more.

Anemones rarely come as potted plants. This is because many variants of anemone reproduce by rhizome, so a potting situation is not ideal for the plant.

Cut anemone behaves much like any other flower when cut. To make your flower last longer, follow these simple steps:

Follow those six steps, and your cut Anemone flowers should look good for at least 10 days or longer!

The Beauty of the Anemone

Anemone flowers truly are a beautiful spectacle rich in history and symbolic meaning from around the world. It’s worth remembering that regardless of their appropriacy in a bouquet or the stories told over history; the most important meaning of the flower is the flower itself, for each anemone, raising its petals to the sky, is a reminder of the beauty of life and its ever-ardent desire to go on—as Alfred Lord Tennyson tells us—“to strive, to seek, to find, and not to yield”. Enjoy! 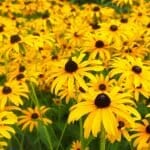 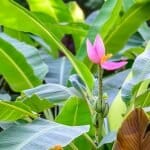